Association SERES, a central American based NGO founded by Lismore local Corrina Grace, has been awarded the prestigious UNESCO–Japan Prize in Education for Sustainable Development.

The UNESCO–Japan Prize on Education for Sustainable Development honours outstanding efforts of individuals, institutions, organisations or other entities engaged in ESD activities. The award to SERES recognises the work undertaken by SERES and their Youth Ambassadors program which provides education on sustainability and climate change and empowers participants to take local action in their communities. Corrina and Guatemalan Senior Facilitator, Abigail Quic were in attendance in Paris to accept the award.

“We are thrilled” Corrina said. “This award is a huge recognition of the hard work and devotion of SERES incredible team of facilitators and local ambassadors, and it highlights the importance of youth sustainability leadership. The award money will be used to continue training young leaders to be ESD Ambassadors.” Over the next 3 years SERES plans to increase its training potential through the construction of a sustainability leadership and learning center in Guatemala.

Since early 2009, SERES has trained more than 2000 young people in 356 communities across El Salvador and Guatemala. SERES programs inspire and activate youth as change makers, empowering them to develop their own strategies towards a sustainable future.

Guatemala is a biodiversity hotspot, home to the largest forested area in Mesoamerica with an abundance of biologically significant and unique ecosystems. However since the 1950’s, over 60
percent of Guatemala’s native forests have been lost and the country has one of the world’s highest deforestation rates. Approximately 75 percent of the population lives below the poverty line, and an astonishing 70% of this population is under the age of 30. This is the group that SERES targets—at-risk youth living on the frontlines of climate change.

Corrina Grace reports that “we find that many of our participants have never heard of climate change, but that doesn’t mean that they aren’t aware of the changes they are seeing. They come from communities that are the most vulnerable to the economic, environmental and social turmoil that is characteristic of these times”.

“We have such an enthusiastic response from participants. Guatemala came through a 36-year civil war in 1996. Most of our young people have experienced atrocities and lost someone they know. They are used to hardship. SERES gives them a voice, and provides the support and skills to make a positive difference in their communities”.

In the words of one participant: “I feel inspired to move forward as a positive, passionate, and engaged leader. For that, I thank you all!”

In 2011, the program included site visits with Lismore City Council recycling and composting facilities, Rainbow Power Company and the permaculture institute at Djanbung gardens in Nimbin among others. Six delegates from the Australian Leadership Awards program now hold key positions on SERES board, as senior facilitators within the organization or as SERES Ambassadors in their local communities. According to Corrina, SERES has received financial support from a number of sources over the years including significant funding from professional services firm NDY.

“The connection to NDY goes back to my time as a graduate mechanical engineer in the firm’s Sydney office,” reflects Corrina. “NDY have always been an outward looking organisation with a strong culture of contributing to communities in need. Their support, through the NDY Charitable Trust, has been crucial in assisting us develop and implement some of our key programs.”

Another important source of financial assistance has come from the Rotary Club of Broadwater Southport. President Dennis O’Brien says his organisation is proud to be involved in the SERES project.

“The contribution our club has made to this project, and the work we have undertaken with Rotary de la Ermita–the local rotary club who are working together to finance the project–has been immensely gratifying and rewarding,” says O’Brien.

“Being able to play a part in improving lives and helping those in need is what we strive to do and Rotary, so the acknowledgment of the work undertaken by SERES in receiving the UNESCO Japan Award is very humbling for all of those involved.” 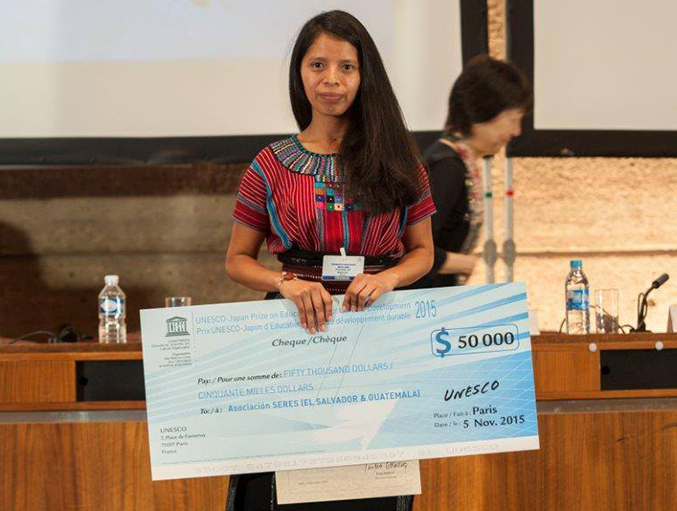 “The methodology that we facilitate–a process that has transformed my way of thinking and acting, and has allowed me to re-connect with the elements and the wisdom of my indigenous ancestors–is very powerful. I have witnessed this same transformation in other youth from communities across Guatemala.”

“As a professional facilitator, this award is a huge motivation and validation of our methodology, because it means that other people are also seeing the impact. It gives credibility to what we do and how we do it.”

“I feel as though we are making this path by walking…that I am walking with an incredible team, helping entire communities start to lead the great shift towards sustainability.”

“I think that this award, for our youth, is a recognition of their time, energy and passion to carry out their community impact plans. It represents an opportunity to continue strengthening their
leadership and reaching a higher level of impact in their communities.”

Within the framework of the Global Action Programme (GAP) on Education for Sustainable Development (ESD), the UNESCO-Japan Prize on ESD honours outstanding efforts of individuals, institutions, organisations or other entities engaged in ESD activities. Funded by the Government of Japan, the Prize consists of three annual awards of US $50,000 for each recipient. The Prize is awarded for the first time in 2015.